At 1 am, Simone long asleep in the guest room down the hall, her children long fed, bathed and in bed, Natasha sat in the dark in the middle of her 4 poster bed, eyes buck wild in the glaring light from her laptop. A pen gripped tightly in her teeth.  For what, there was no particular reason. There wasn't any paper in sight.

Natasha's eyes grew heavy as she leaned back against the headboard and let out a weary sigh.  Her head was foggy from staring at the computer screen for hours.  She'd uncovered so much deceit and scandal that Tyrone had been doing, pretty much out in plain sight.  She already knew Derek had the real tea.

She picked up her phone. No new texts.  She threw it down on the bed, biting her nails in a year-long bad habit.  It didn't matter that they were acrylic. She simply nibbled on them to ease her anxiety.  The sound of her teeth clicking on the hard surface calmed her for some strange reason.  It was why she chose to keep wearing fake nails instead of going natural as she let her hair do 2 years ago.

Natasha picked up her phone again.  Activating one hand texting, she reached over for her wine glass.  Pink Moscato, as boughetto as it was, was her favorite.

She went to her contacts and scrolled down to the P's where she kept Derek's identity, semi-hidden.

If Tyrone ever saw the name in her phone, he would see no corresponding text messages.  Natasha was compulsive about deleting the flirtatious conversations she had with Derek, immediately after they ended.  She knew the guilt was an indication what she was doing was no better than Tyrone, but her need for attention was greater than her need to remain the righteous one in all of this.

She had put him, her children, his career, everything before herself.  She deserved this one guilty pleasure. 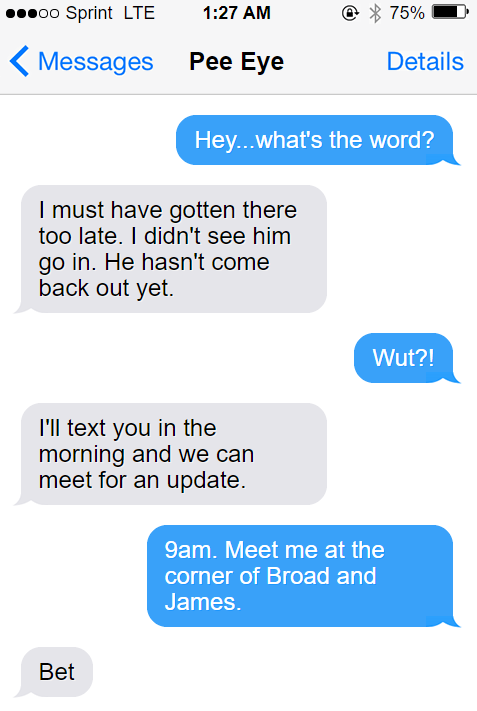 Aside from the fact that her stomach was on the floor and her adrenaline soaring, Natasha took a moment to reflect and re-read the text messages. Something was off with this exchange.  Even as short as it was.

Why was acting so professional? Why so much of a rush to get me off the phone if you're just sitting outside in your car doing nothing but waiting?

Natasha sat her wine glass down on the nightstand and fired up the tracker app on the laptop.  Indeed Tyrone was still at the house, as he had been for hours.  He hadn't once left that location, since Natasha spoke to him earlier in the day.  So much for "cleaning up", she angrily thought to herself.

The lying bastard didn't even HAVE an event tonight!

Natasha, with quick determined steps, made it to her closet in 3 easy strides. She wasn't about to sit here.  She would wake up Simone to stay with the kids, and go to this address, to see for herself what was going on.  She'd deal with Derek later, he wasn't of any significance at this point.  It was what it was, and therefore she had no intention of warning him she was coming...

"You're destination is on the right."

The built-in navigation system on the dash of Simone's E-class Mercedes alerted Natasha she was at her destination.  Sure enough, there was Tyrone's Hummer sitting in the driveway.  There was no other car in front or behind his unless it was in the garage. Natasha did not see Derek's car anywhere in sight.

That lying mother fucker was scamming her!  She knew it was too good to be true but had no time to deal with that POS right now.  She'd handle him after she saw what was in this house.  She passed the house and parked down the street on the opposite side.

Natasha felt like she was watching herself from a window across the street.  The scene was surreal in her mind.  She kept thinking of her children and raising them alone. The D-word becoming more and more of a reality with each step she took.

She noticed the front porch light on, and several rooms in the house lit up. Quickly looking over her shoulder, she ducked down and ran up the side of the house, throwing her body up against it, as she had seen done in the movies countless times.  It didn't make her invisible, which is how she stood, perfectly still, holding her breath, but yet, she remained undetected.

Thank goodness there weren't any dogs around.  They surely would have given her up by now.  She was truly not about this life, she thought to herself.

As her eyes adjusted to the darkness, and she tried to calm her breathing, she could faintly make out a male voice coming from one of the lit rooms at the back of the house.  She made her way there slowly, using her phone as a flashlight, as not to trip on anything and alert the occupants to her presence.  She turned the light off and fired up her camera as she approached the window.  She had to duck down to keep from being seen and as she leaned in she could make out Derek's voice.

"You told me you were going to leave her, Tyrone!  What the fuck! I'm tired of flirting with her ass and watching you go home to her every night!"

Derek was pacing back and forth across the hardwood floors.  They looked as if they had been freshly waxed and gave off a reflection of Derek as he walked.

"When she asked you where you were today, I sat there and told you that she was looking at the tracker on your car, and to be careful. You couldn't remove it because she would know something was up, so you were to play it cool, let me come up with a reason you had this house in your name, and we go from there! You don't really care about me, you only care about saving this bullshit ass marriage and your reputation!"

Tyrone was sitting on the bed with his head in his hands.

Natasha hit the record button her phone, opting for audio instead of video proof later.  She couldn't risk being seen to get it anyway, so she ducked down and stayed there.  Tears welling up in her eyes.

Anger, surprise, shock, devastation, and then reality washed over Natasha's body all at once.  Derek was sitting in the car with Tyrone earlier when she had asked him to go investigate.  It was taking everything in her not to stand up and kick the damn window and their heads in.  She knew she had to hear this out.

"Derek, look.  When I asked you to play along, I had no idea how far this would go.  I thought you would be able to distract her. How the fuck did you let her get access to my bank records and this property address?"  He stood up and placed a hand on Derek's shoulder.

Tyrone was good at turning the tables when it suited him, and Natasha was glad to see he was an equal opportunist. No pun intended.

"She wants me to meet her at 9 am at Broad and James with proof of what I saw here tonight."

Derek sat down on the bed where Tyrone had just stood up from, and looked up into his face, a tear streaming down his own cheek.

"Derek. This is the final lap.  You got this.  Do this as we discussed, give her the fake documents and keep her off my ass long enough for ME to be the one to file for divorce and take my kids."

Natasha lost her balance and fell over in the grass.  She had to cover her mouth to keep from letting out a scream.

You've worked hard all week. Helped the kids with their homework. Did the laundry, cleaned the house, worked a 40 hour work week, cooked Sunday dinner - now it's some "me" time. Grab you a glass of wine and unwind with a weekly tale.

M.I.L.F. & Cookies is dedicated to all the underdogs out there. The women who are underappreciated, doubted, ignored, counted out and mistreated. No matter what age you are, if you have children and doing your best to hold your own, there's a woman out there who shares your struggle. These fictional tales are based on real women, with some details changed to protect their identity. It's real outchea!

Each week, for 4 weeks total, you'll follow a new M.I.L.F, going through some real shit. Something some of us can relate to these stories and experiences, in some cases we can feel them on a personal level. I hope you enjoy the drama, the suspense and the cliffhangers. If you want to be the source for a M.I.L.F. story, I'll gladly change your name, and details about you to keep you anonymous.